Katie and her husband, Joe, were married for ten years before they got the news they had been desperately hoping and praying for: Katie was pregnant! Her pregnancy was uneventful for the couple except for the growing joy and anticipation of becoming parents.

Johnnie was born right on time on June 28, 2016, and he was immediately adored by his parents.

All was right with the world until one day two years later when Johnnie began running a fever of 104 degrees and having seizures. Frightened as any new parents would be, Katie and Joe rushed Johnnie to the hospital in Lawrenceville, Illinois, where he was referred to Ascension St. Vincent. With nothing but the clothes on their backs, the three made the hour-and-a-half ambulance ride to Evansville. Hospital social workers offered the couple a referral to Ronald McDonald House on Washington Avenue in Evansville, but the two couldn't bear to be apart from their son, who continued to have seizures nearly nonstop for three days. "Once Johnnie was stabilized, we still couldn't leave him for more than a few minutes, but our social workers encouraged us to go to Ronald McDonald House to at least eat, get showers, and have a little break to refresh our minds," says Katie. Joe was the first to go but she was still too shaken up to leave Johnnie. "I finally forced myself to go when Joe said to me 'honey, you really need a shower,'" she recalls with a laugh.

On the day before Johnnie was released (with a diagnosis of epilepsy and a solid plan for treatment), the RMHC Happy Wheels Cart rolled down their hallway. "Johnnie was overjoyed just to have a treat and juice box, but you would have thought he was handed the moon when the volunteer asked him what toy he would like," says Katie. "He asked for Legos but was just as pleased when told there were none that day and was given a junior tool box instead. Imagine our
surprise when the cart volunteer returned later with a set of Legos because she felt terrible when she didn't have what Johnnie wanted. She will never know how much her kindness lifted my spirits."

Today, Johnnie is a happy, healthy 7-year-old and brother to 3-year-old Avery. Katie is general manager at the Robinson McDonald's in southern Illinois. Katie says she will be forever grateful for the care she and her family received. " All of the medical staff, cart volunteers, and everyone at Ronald McDonald House were just amazing. Beyond amazing!" 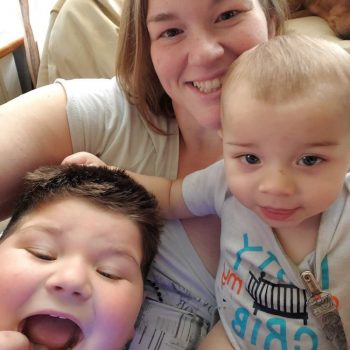